Cut to:
The Maysles Brothers Had a Few Sisters

There are twenty-two documentary films that are commonly referred to as films “by the Maysles” despite the fact that five women played a crucial role in their production.

But let’s start at the beginning:
Between 1955 and 1966, David and Albert Maysles made nine films. David (1931-1987) usually did most of the administrative, research, production and editing work. Albert (1926-2015) was primarily the cinematographer. They are credited as “the filmmakers.” On three of the films, others are credited as editors.
In 1966, Charlotte Zwerin was brought in to edit their tenth film, Meet Marlon Brando (1966), and that’s how she was credited. But knowing what a key role an editor plays in conceiving the story and the structure of a documentary (which rarely has a detailed script), she fought for equal billing on the following film, A Visit with Truman Capote (1966). This is the screen credit: 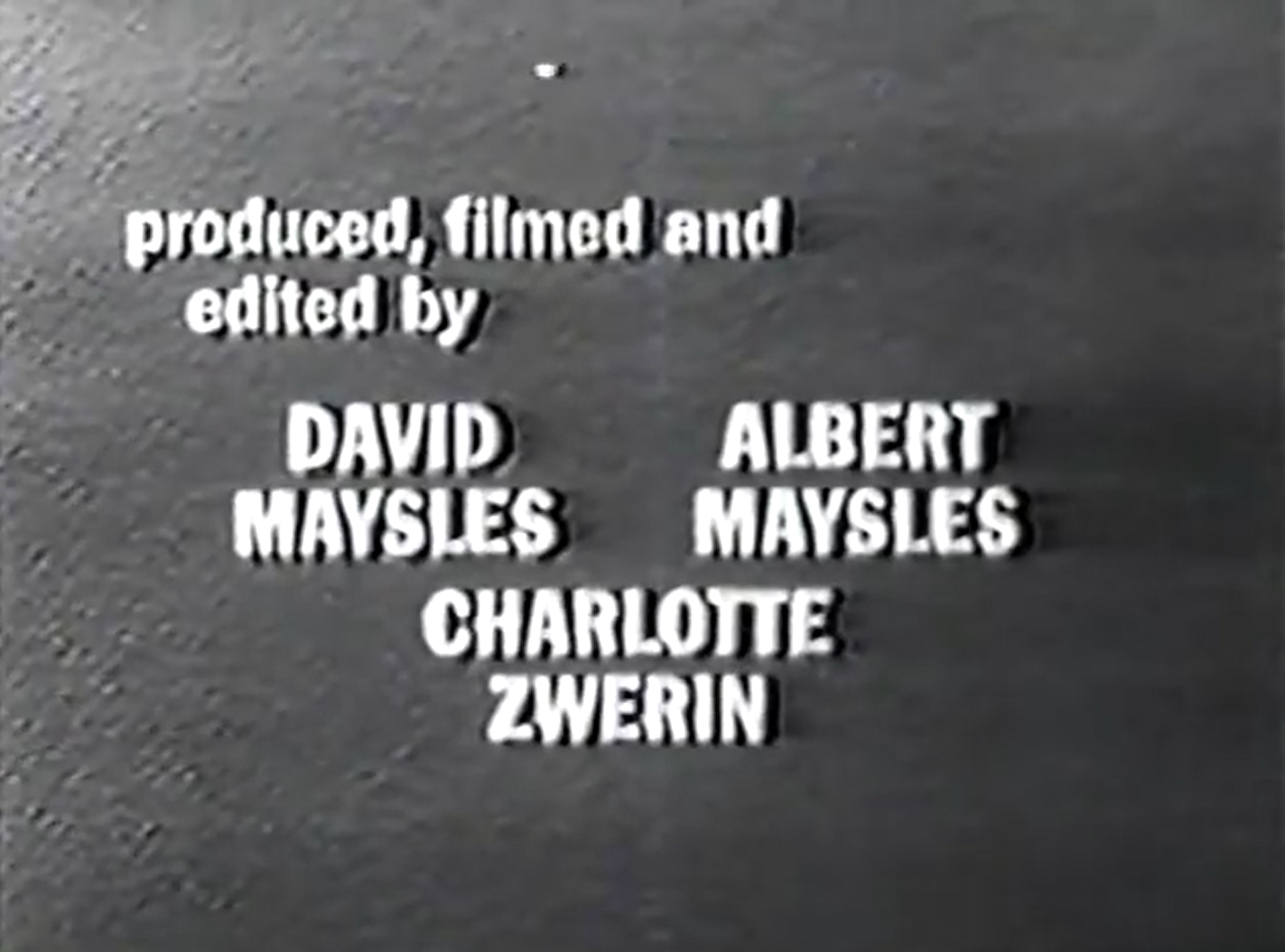 Her name is on the same page, in the same type size, and no one is singled out as the director. (In documentation about it, all three of them are listed as “the filmmakers” and also as the editors.)  Because she prevailed that time, Zwerin’s contribution is clearly noted in the first credit card on their next film, Salesman (1969). 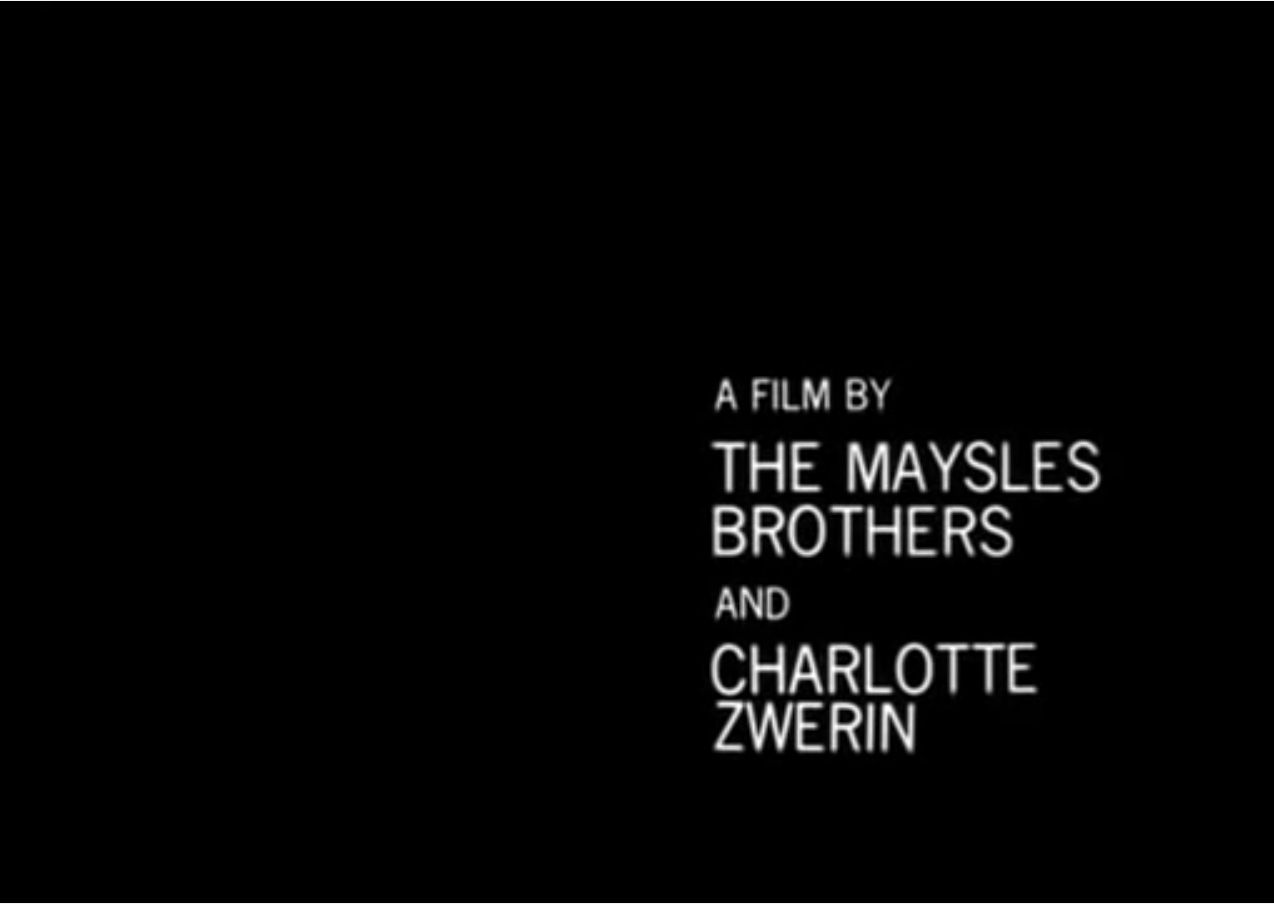 The second card specifies their roles and again doesn’t name anyone as the director. 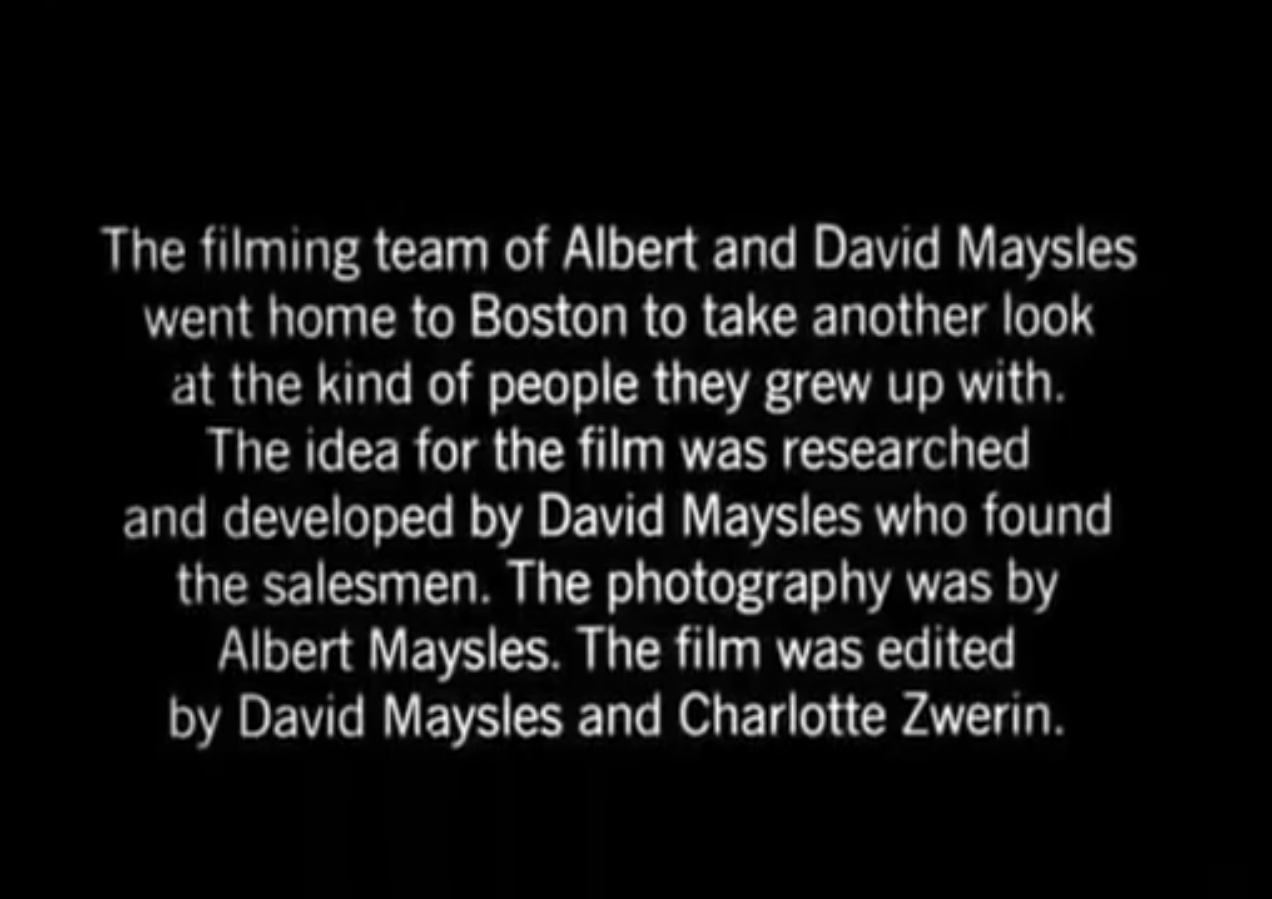 The third card names two other editors who worked on it (and more about them later.) 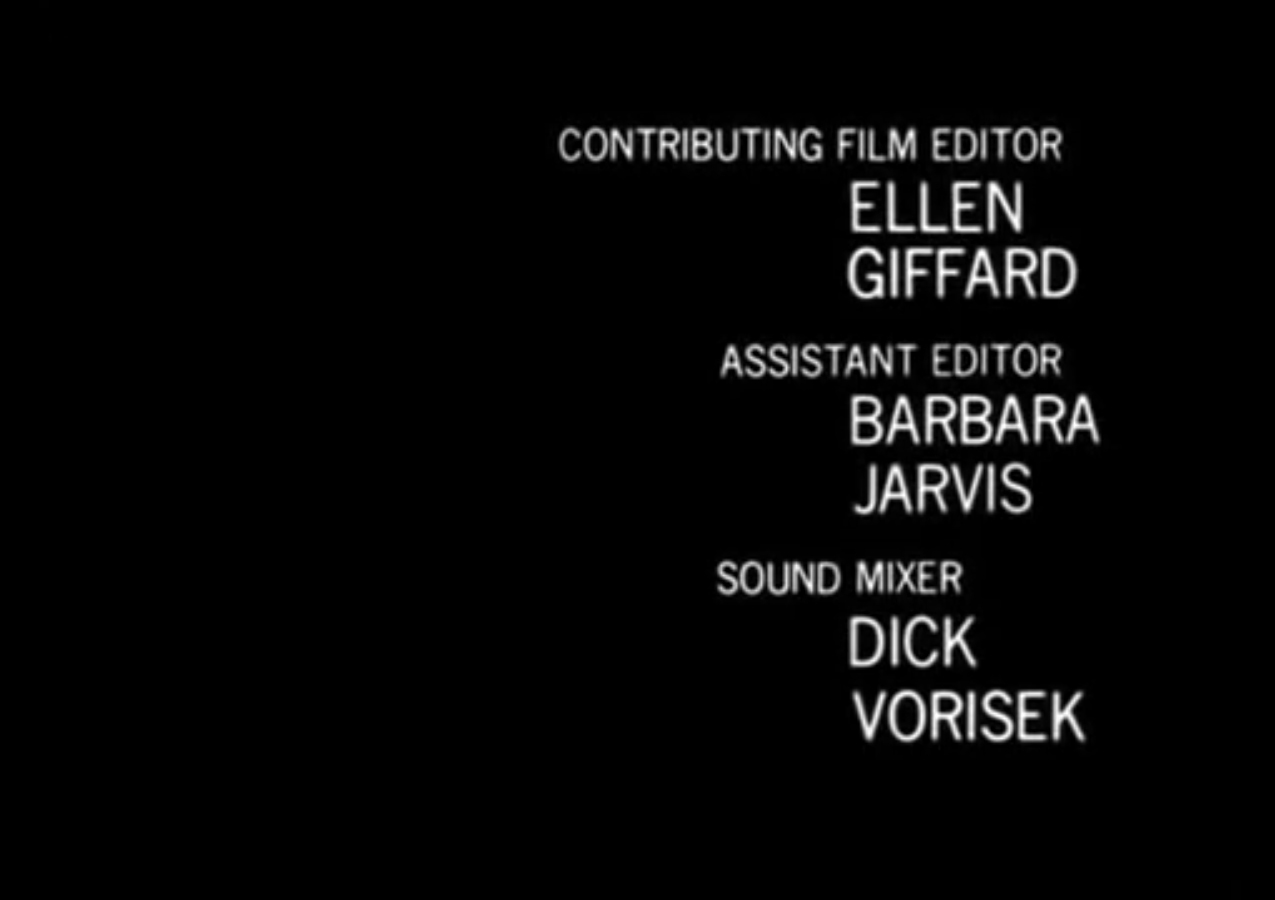 Then there’s this last credit. 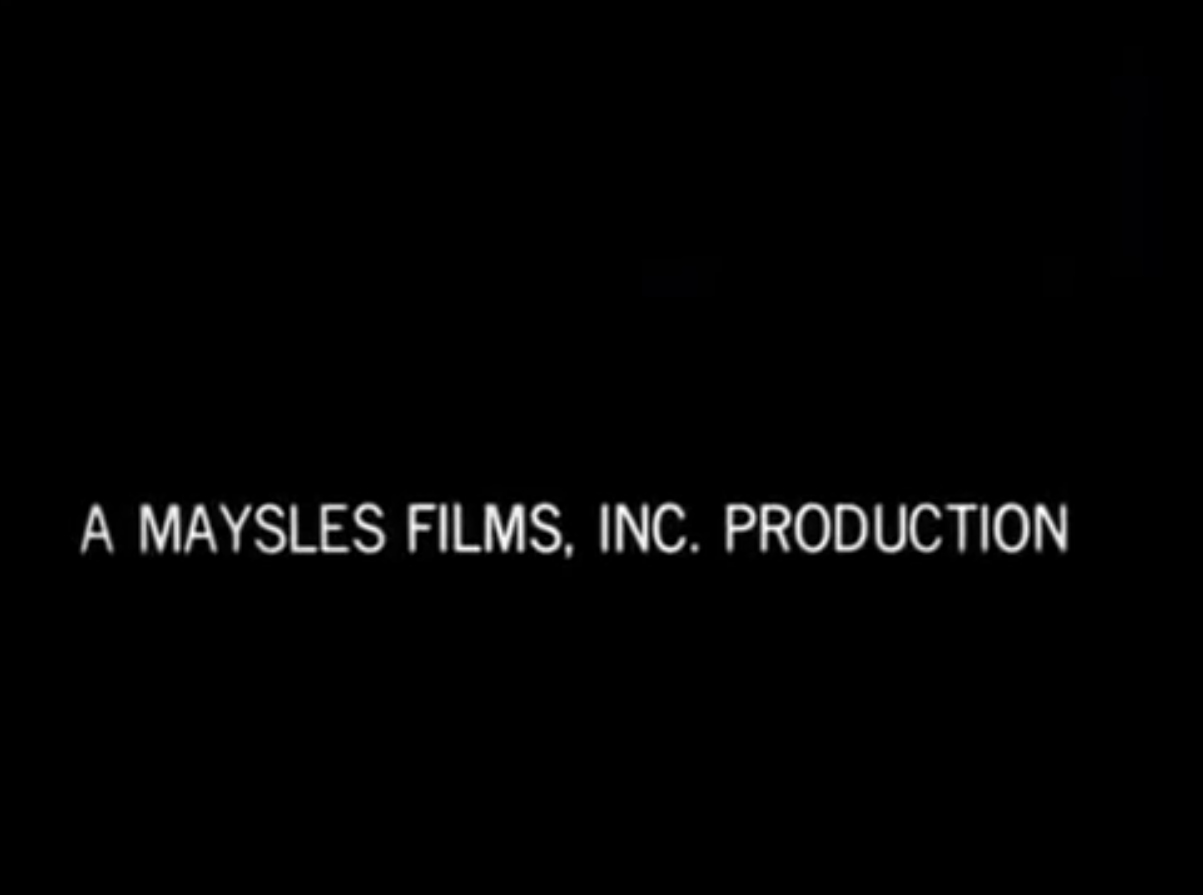 And that’s where it gets sticky:
That credit is not a “creative credit,” it’s an acknowledgement that the film was done through a certain production company, and that the company took the legal and financial responsibility for the film.
In some cases, as with the Maysles, the production company is mainly just the filmmaker(s). In other cases, it’s run by administrators instead of, or in addition to, the various filmmakers whose work is being produced. In all cases, the production company certainly deserves a prominent credit on a film.
Needless to say, this is an essential part of how films get made, and the Maysles deserve full credit for taking up and carrying that burden.

And I’m not suggesting that the Maysles named their company as they did in order to hide the role of Zwerin (in this instance, or any other editor on other films); they were raising the money, running the office, etc., so it was accurate for that to be the company name.
The problem is that the name has led to a false and harmful impression about who made the films under its auspices.
.
Case in point: Salesman was the film which put the Maysles on the map, and it continues to be one of the most well-known and admired films on which they worked, but it also continues to be referred to as “a Maysles film.”

Here’s the trio during the work on their next film, Gimme Shelter (1970). The photographs are by Amalie Rothschild, who shot many of the iconic portraits of performers at the Fillmore East, Woodstock and other seminal rock events from 1968 to 1974. 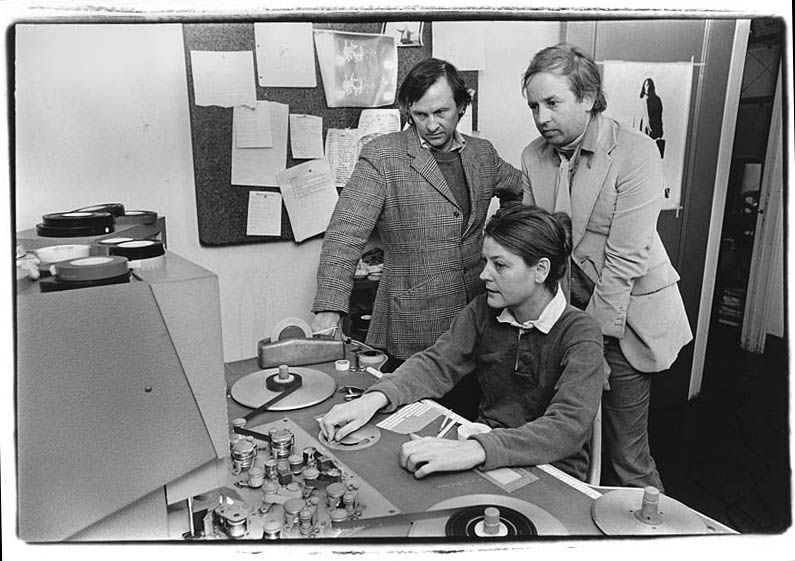 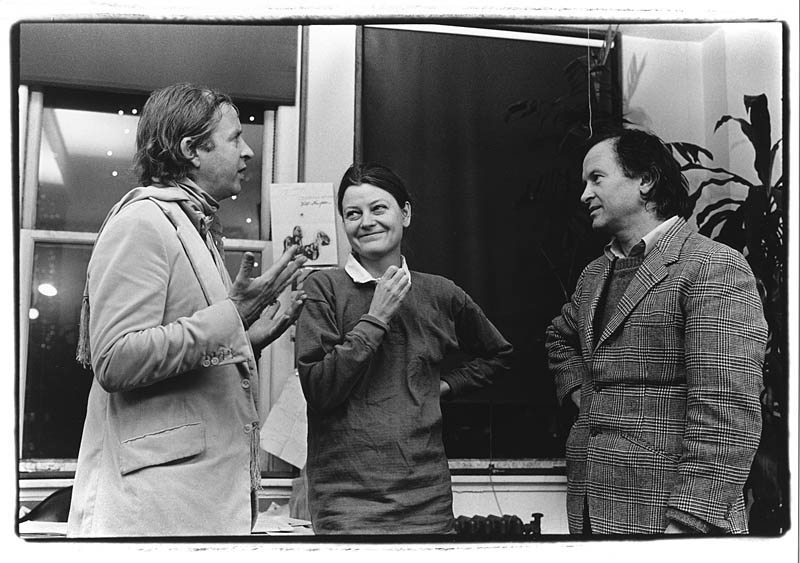 Zwerin’s rightful insistence on getting equal credit laid the groundwork for the other women who collaborated with the Maysles, as evidenced by the credits on the following film, Christo’s Valley Curtain (1974), on which two of them worked. The primary editor was Ellen Giffard, who is credited along with the Maysles as one of the three directors (and who had that contributing editor credit on Salesman). The assistant editor was Susan Froemke.

And then came Grey Gardens in 1976, which vies with Gimme Shelter for the honor of being the most well-known film “by the Maysles.”
It begins with a standard production company credit, albeit one with a different name. 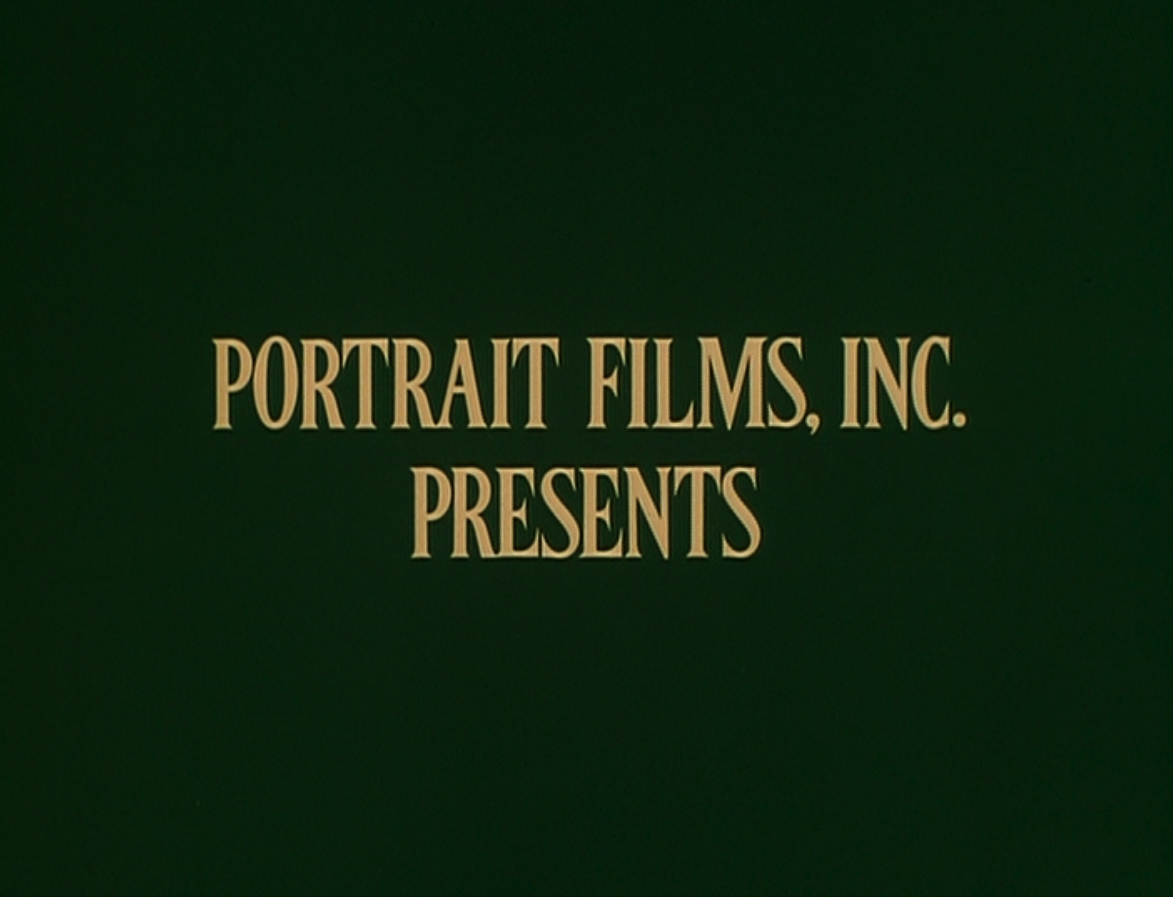 But then there’s this one, which creates the impression that the brothers are the key makers, i.e. the directors. It’s similar in spirit to the first one on Salesman, but that one included her name. 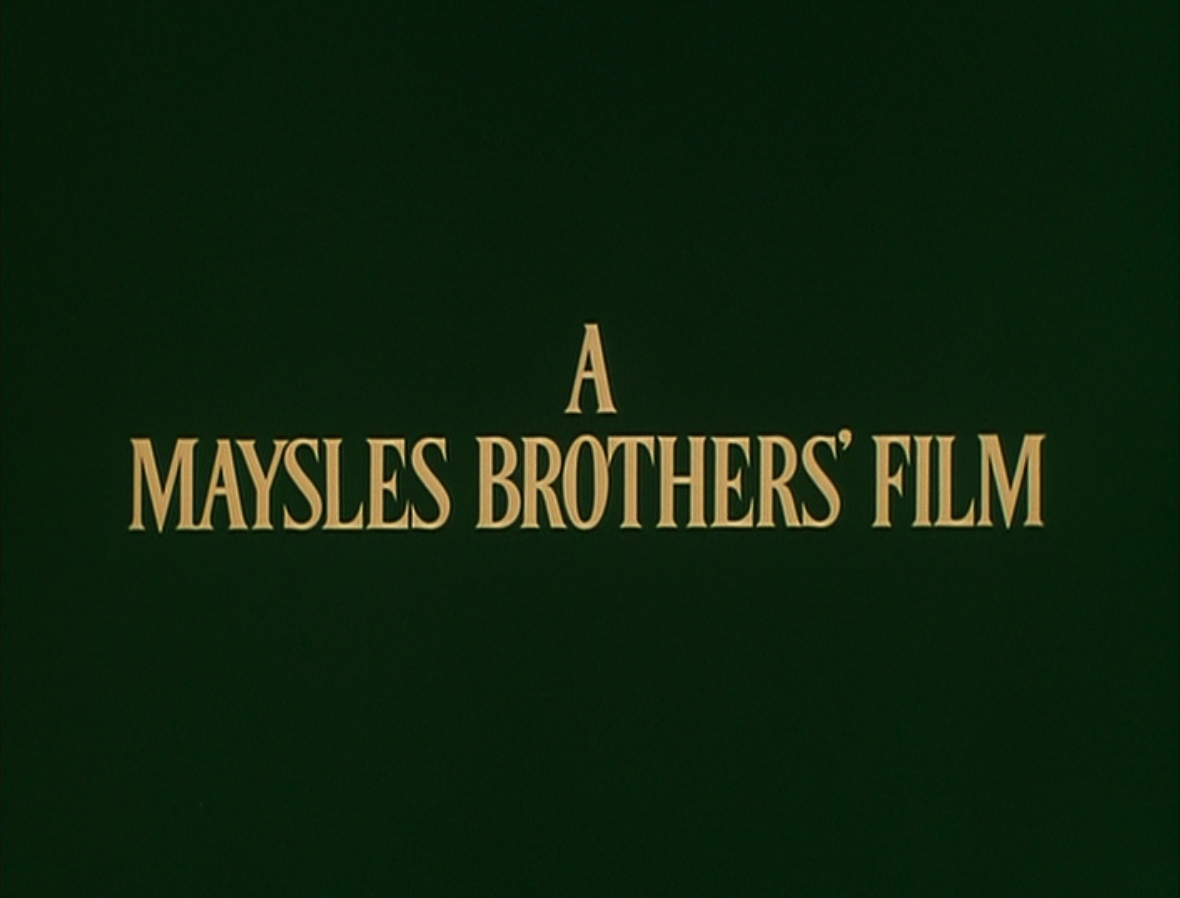 The next card reveals that the impression created by the first card was somewhat misleading. 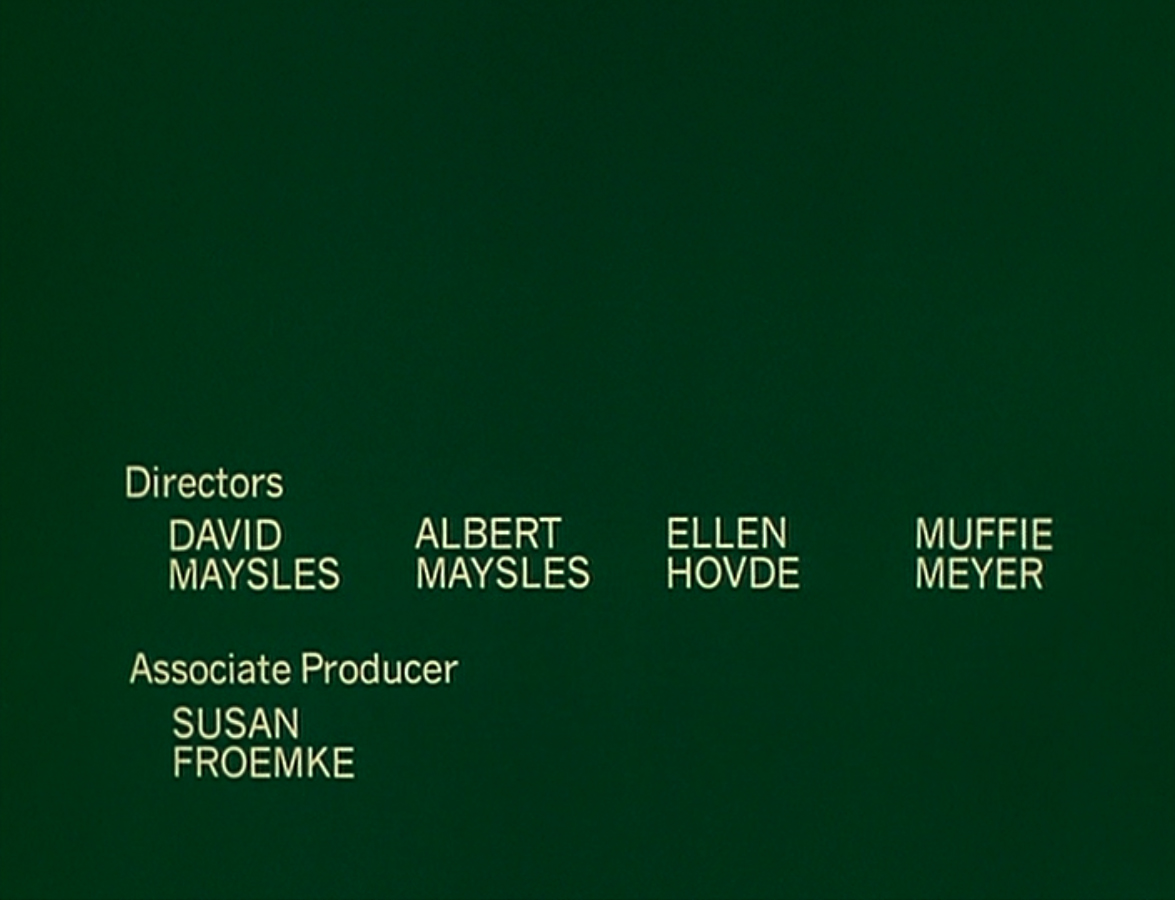 In regard to this one: We’ve met Ellen Hovde before as Ellen Giffard; this was Muffie Meyer’s first collaboration with the team; Susan Froemke appears for the first time here (as the associate producer, but she has a co-director credit on thirteen more films after Grey Gardens.)

Here’s a photograph by Marianne Barcellona of the team. 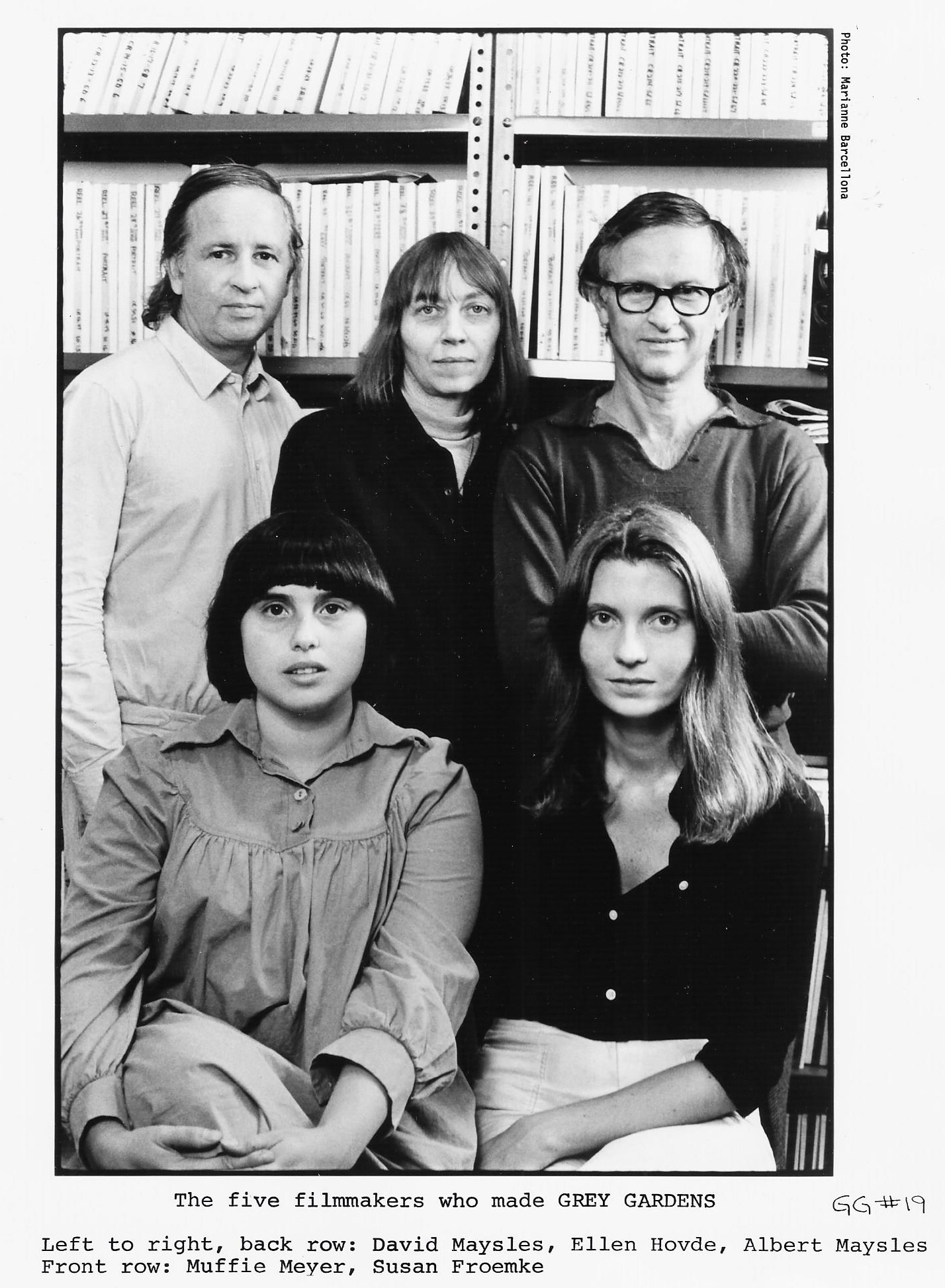 To reiterate: between 1966-2001, whether working only with the brothers or with one or more of the other women in addition, these five women were central to the making of those twenty-two films “by the Maysles.”

Granted, it can be cumbersome to always name three, four, or even five co-directors when referring to a film.
And there’s no harm in acknowledging the key role that the brothers often played in jump-starting the films and running the production company (although one must note that Susan Froemke took over most of David’s functions after his untimely death; some have said that she became “the other brother” for the next thirteen years.)

So, when we need a shortcut that acknowledges the whole team, how about if we retain the family name but start referring to those twenty-two films as being made “by the Maysles Sisters and Brothers”?

And we can imagine alternative screen credits—for example, this new opening sequence for Grey Gardens, which gives due credit to the production company, and then to the makers: 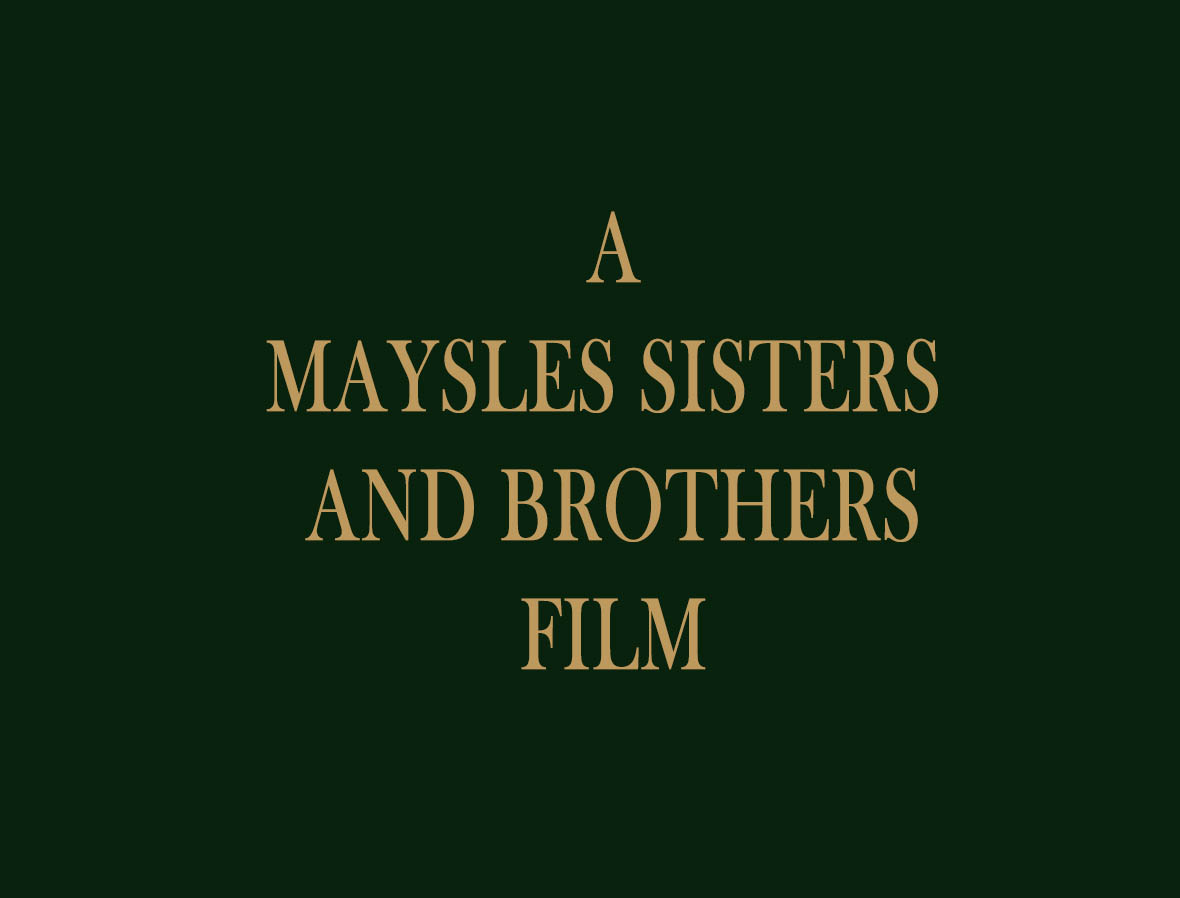 After all, in the brothers’ filmography of forty-three films, the ones made in collaboration with the sisters are more than half the total number.

But this story doesn’t end in 2001 (when the twenty-second film was finished) because Dickson, Froemke, Hovde, Meyer and Zwerin have all directed (and sometimes also edited) numerous other films in addition to the ones they made with the Maysles Sisters and Brothers.
Four of them are included in the “Filmmakers Who…” section of this website (and the fifth will be added soon) but the biographies of all five are presented on the next page so that you can see the range of the work they’ve done with and without their filmmaking brothers. There you will also find a complete list of the films made by the MS&B team.