Cut to:
Getting Front Screen Credit—Finally 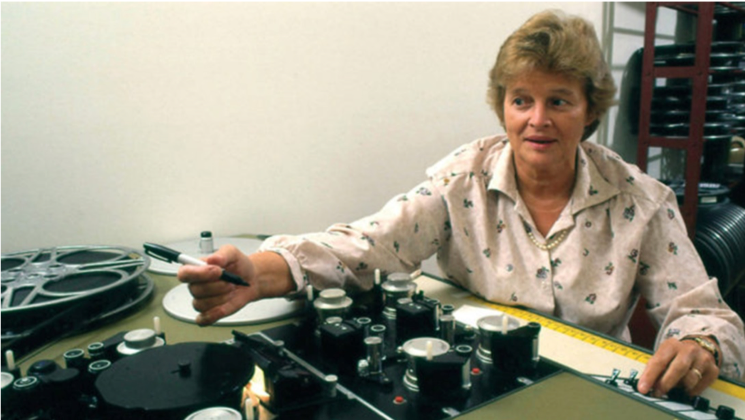 The industry standard was to not credit the post-production crew “up front.” Male and female editors were relegated to the back end, usually sharing a page with many other crew positions, and therefore they usually went unnoticed (except on Oscar night).
Dede Allen’s innovations in editing greatly contributed to a change in this absurd practice.
Peter Tonguette in Cinemontage notes that, “It is widely acknowledged that Dede Allen, A.C.E., was one of the first editors to receive a single-card credit in 1967 (on Arthur Penn’s Bonnie and Clyde, which garnered Allen an Oscar nomination), though an informal survey reveals that the practice was becoming increasingly prevalent several years earlier. In 1964, George Tomasini was given a single-card credit on Marnie—just five short years after he was listed along with the hairstylist on North by Northwest.”

“Allen made two massive contributions to the art of editing; the first, her trademark quick cut-in following a slow fade-out. The other, which gave her name to the “New York School” of editing, was the prelapse, which meant the sound of a subsequent scene would start just before the scene starts. Dede had to fight for other editors to stop correcting her “mistake”, but soon she had trained and taught enough editors for them to go away and spread the “Dee-doid” Gospel. After her work, editing would never be seen again as a mere technical discipline – it had become an art in its own right.”
—Excerpt from “‘A Tedious Job’ – Women and Film Editing” by Sara Galvão at Critics Associated.

“Sam Spiegel didn’t hire Dede Allen on The Swimmer because she wanted that single card front end credit that you mention. She quit the film before shooting to do Bonnie and Clyde, where she got it. Spiegel had told her that he couldn’t give her that credit because it would set a precedent and he would have to give every other “cutter” the credit!”
—Email from Chris Innis, sent to me after seeing this page.

Note: Chris Innis directed The Story of the Swimmer, a documentary about the making of The Swimmer. Her account was found in Eleanor Perry’s notes, which are housed at the Academy library, because Perry wrote the screenplay for The Swimmer, an adaptation of a short story by John Cheever.
Chris Innis is also an editor and has her own page on this website.

(And you can see many more examples in the Screen Credits Gallery.)