Filmmakers Who (always or sometimes) Edit

Half of the website is devoted to women who were, or are, editors by profession, but being an editor can also mean working outside of the usual context (i.e., not as a member of a production team). The filmmaker Maya Deren was included in the “editors by profession” group because her editing techniques have had an immeasurable impact on both filmmakers and editors, and also to mark a place or raise a flag for the different kind of editor being covered here: the filmmaker who wears some combination of many hats, as a producer, director, writer, editor, and/or sound editor.

She might wear all of those hats, or just a few of them.
She might be making narratives, documentaries, experimental films, or some mixture of those.
She might also work as an editor on other people’s films, or she might not.
She might always edit her own films, or she might only edit some of them.
The simple criterion that unites this very diverse group is that, while they aren’t like the other women in this survey—whose primary job is as an editor—they’re filmmakers who edit some, or all, of the time.

The editing techniques invented or refined by these women have been as important as those which have been developed and employed by professional editors.
To quote the great and wise Germaine Dulac:
“The avant-garde and commercial cinema, or the art and industry of film, form an inseparable whole.”

This is an admittedly brief survey (arranged alphabetically) of a vast and varied group. For each of the seventy-four women I’ve listed, there are fifty or a hundred more who could stand in her place, so if I’ve left out some filmmaker you love, including yourself, please forgive me.

Finally, here are two of the women represented in this section: Agnès Varda and Shirley Clarke, in Central Park in 1966. 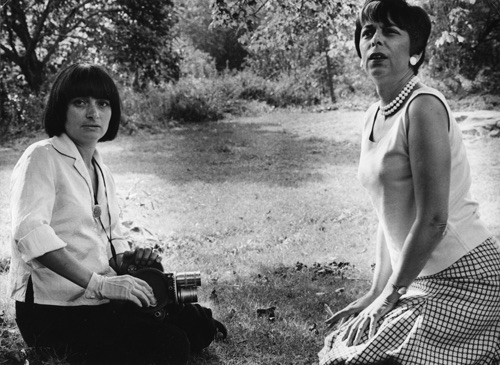